In what is likely to be the last live football Bury fans will experience for at least a month, as England returns to a state of lockdown this week, there was further late drama at the Neuven Stadium as a last gasp header from midfielder Kris Holt rescued a point for nine-man Bury against Golcar United on Tuesday night.

With Tom Greaves missing upfront, Liam MacDevitt moved into the central strker role and Kamar Moncrieffe came in for his first start upfront alongside MacDevitt and fellow wide player Aiden Chippendale. A welcome addition to the bench saw Aaron Dwyer return to the team for the first time since going off injured at Coppull United in late August. The rest of the team lined up as they did at the start of the 5-1 win away at Garstang last week.

Former Bury defender, Joe Skarz, took his place in the defence for the visitors who made a late change in between the sticks as Harry Stead came in for Adam Lawlor. And it was Stead who came into action to hold Bury at bay early on. A string of corners were missiled in on the shot-stopper who did well on a number of occasions to break through the crowded six-yard box to get a hand on the ball and mostly push it away from safety.

When the chance did come for Bury to take the lead in the 17th minute, a free-header from Jimmy Moore found its way above the bar when well placed and then five minutes later Jono Hunt rose highest at the back post to force an instinctive stop on the line from Stead. 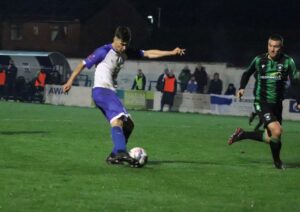 Set-pieces were the name of the day as the game was littered with free-kicks which prevented either side from gaining significant momentum. The best chance created in open play was as a result of a Matty Williams run from right-back in the 31st minute, picking up the pass with his angled run to beat two and slam his shot goalwards but again see the effort palmed away for another corner.

Scotty Metcalfe saw himself as the first Bury player in Mr Moosa’s notebook with a robust challenge in the Golcar area on 31’ and he was followed into the book by Golcar forward Burnett moments later who stretched for a ball that Downing cleared away in the centre circle. With the rest of the half event-free, the teams headed into the break all-square and Ed Wilczynski’s goal largely untested.

Bury kicking off the second half, again attacking towards the seated supporters in the Lodge End of the ground. And they saw Stead in the Golcar goal slide out of the penalty area whilst trying to retrieve the ball to concede an early dangerous free-kick which the wall blocked away and the chance was lost.

Plenty of huff and puff from both sides across the first 15 minutes of the second half but chances were at a premium. Moncrieffe getting a yellow for his challenge on the edge of the Golcar box which broke up an attack, was the only point of note until it was Moncrieffe in the action again on 65’.

With Matty Williams putting in a right-wing cross, Moncrieffe watched on as his tussle with Lawrence resulted in the defender seeming to handle the ball away as he fell backwards, leading to screams for a penalty by the fans behind the goal being waved away by the referee. 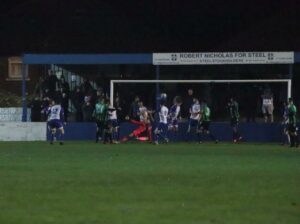 With chances continuing to be at a premium and the game heading for a scoreless draw, Golcar took the lead on 71’. A loose backpass from Hunt led to a corner for the visitors, with the cross coming from the right and Wilczynski pushing the ball only down towards the penalty spot and into the path of Fish who stroked home the ball through the melee of players on the line and leave Bury needing to find their way back into the game.

Forward reinforcements were called for from the bench, with a combination of Dwyer, Daniels & Gilboy coming on Moncrieffe, Whitehead and Chippendale as the final 20 minutes played out and Bury pushed for the equaliser. MacDevitt went into the book on 74’, for an innocuous-looking challenge that Stead seemed to make the most of whilst making a clearance on the edge of the Golcar box as the minutes eeked away. 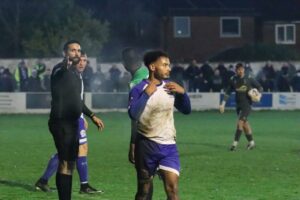 A chance fell to Gilboy with two minutes left which Stead initially saved but only into the path of MacDevitt and recovering Skarz. With the chance on, the two slid into the ball, Skarz managing to make the clearance and the referee blowing up for a free-kick deeming MacDevitt to have fouled the defender in the process. Mr Moosa proceeded to bamboozle the home faithful by then pulling out a straight red card for MacDevitt for what looked like a loose ball that was there to be won.

The challenge of equalising suddenly became a harder proposition, made further worse as at first Holt was booked when breaking up play and then Golcar broke upfield as the game entered added time.

Again with the ball to be won, Ed Wilczynski raced out of his area to challenge Cartwright with Bury defenders racing back to cover. Cartwright made the ball first and was felled by the on-rushing ‘keeper. Again, the referee reached for his top pocket to pull out the red card and Bury were down to nine men.

With all substitutions made, Jimmy Moore assumed the ‘keeper shirt and the remaining eight outfield players sought about getting that one chance to level the game and what a chance it was. 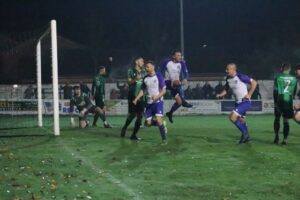 Scott Metcalfe was at the centre of most things across the night and with the time ticking into the fifth added minute, he was needlessly felled 35-yards out. Placing the ball down and urging all players forward for what would undoubtedly be the last chance, he crossed to the advancing Holt who had escaped the clutches of his marker and deflect his header low to Stead’s left and send the Neuven crazy, again!

Shortly after the restart, the final whistle was blown and it felt like the team had come away with a point was the least that they deserved – a point that takes Bury AFC to top of the league on the night.