A short turnaround found us back at home on Tuesday night for a clash with local neighbours, Prestwich Heys. For the first time of the season, we were to experience a weeknight game under the lights at the Neuven Stadium.

There were a couple of changes from the 6-2 win against AFC Darwen on Saturday: Jimmy Moore coming in for Bailey Sloane, Matty Williams wasn’t able to shake off an ankle injury and was replaced by Tommy Lent and due an injury picked up in training, goalkeeper Ed Wilczynski was replaced in net by former Burnley ‘keeper Kai Calderbank-Park.

And it didn’t start too well for the young shot-stopper, unable to latch on to a bouncing free-kick in the fifth minute, the ball rebounded to Jamie Roe who calmly passed to Jack Coop to slot in from a couple of yards out to give the visitors an early lead.

An early sub in the ninth minute, Niall Sultan making way for Alfie Belcher, didn’t affect Prestwich who continued to trouble the Bury defence. The home side only starting to come into the game within 15 gone. First Holt had a shot deflected away, leading to the resulting corner being played short and eventually finding Chippendale who couldn’t repeat the exploits of the game from weekend, scooping his finish over the bar.

The first key chance fell to the same player 10 minutes later, again from a set-piece. This time from the right, the in-swinging ball from Scott Metcalfe was dealt with only partially by the defence. The looping ball landed at the feet of Chippendale who positioned his body to strike the ball first time goalwards on the volley. This strike cannoned off the bar and eventually away from danger. 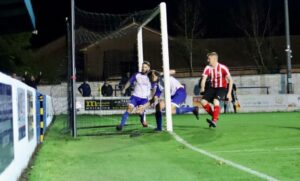 A cross-come-shot from Hill almost caught Calderbank-Park unawares on 28 minutes. With what looked like a harmless effort that seemed to be sailing over the goal, the ‘keeper watched as the effort brushed against the bar and stayed in play. Fortunately, the Bury defence was on hand to mop up and clear with ease.

That wasn’t it for Prestwich for the first half, who following a break down the right, Beltcher attacked the box, cut inside and placed his shot heading for the bottom corner. But for a fantastic block from Jimmy Moore, it could have been two-nil as the teams headed into the break.

Bury kicked us off for the second half, now shooting uphill towards the seated area at the Lodge End, the home fans relocating behind the net at that end in the hunt of goals. And the home side certainly started off the second half in better shape than the first. With first Gilboy getting into an advanced position and shooting from a tight angle that was cleared on 46’, and then a through ball on 48’ from Lent found Greaves. Showing typical strength to fight off his defender, the striker took a heavy touch which brought the ‘keeper into play and the chance was lost.

The wide men were certainly getting more of the ball as first Gilboy, and then Chippendale were providing the ammunition for Daniels and Greaves to feed off. Greaves deflected a header wide with an hour gone, before Gilboy made way for Liam MacDevitt who similarly glanced his header wide when positioned well, then Lent couldn’t capitalise on the ball breaking his way 10 yards out and the Prestwich defence kept their clean sheet intact. 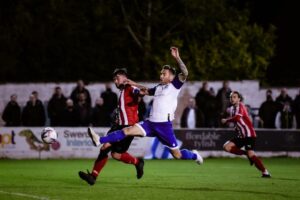 Some further deep crosses from Metcalfe, one set-piece and the other from open play, found Downing at the back post but the efforts didn’t create clear cut chances. As we headed into the last ten minutes, the home side was still in search of an equaliser and cramp was starting to set in for many of the Heys team as they fought to preserve their slender lead.

Still looking threatening on the break, Prestwich absorbed the pressure of the Bury attack which led to a further Bury change when Joe Stanley entered the field of play for Tommy Lent on 80 minutes. This change led to a three-man defence and the attack given more options to seek the equaliser which duly came less than three minutes later.

With play developing down the Bury right, the two goal-scorers from Saturday combined with Chippendale setting up Greaves with a pinpoint cross that enabled a delicate header to be planted over Saunders and into the goal to set up a grandstand finale. That’s seven goals already for the former Ossett man, as he looks to go in search of the top-goalscorer awards and we are only three games in. 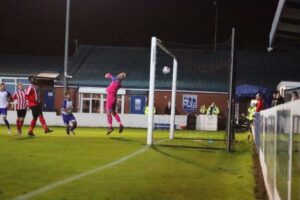 With Bury throwing bodies forward into the final stages to recreate a Steeton-type resurrection, Heys countered at every opportunity. Dwyer saw Calderbank-Park off his line and from fully 40 yards, chipped his effort towards goal to see the ball drop just over the bar and out for a goal-kick. That effort certainly had the ‘keeper scrambling.

A recovery run from Moore as Heys broke again, did prevent Shawcross having a strike on the Bury goal, as he got a foot on the ball as the wide-man looked to cut inside. But within moments, the Bury defence was exposed again, this time from the next Bury attack that broke down on 90 minutes. The ball found its way to Belcher in the same position as Shawcross but this time, just the ‘keeper to beat. His strike to the Calderbank-Park’s left was fierce but it slammed against the inside of the post and away for a goal-kick to give Bury another let-off.

However, that warning was not heeded as the game headed into added time and with Bury seeking out a late winner of their own, Heys sensed the victory too. As another Bury attack fizzled out, Heys advanced with the ball, eventually reaching Coop on the edge of the Bury box who cut inside his man and forced his shot low past the despairing dive of the ‘keeper and sending the visiting fans wild. 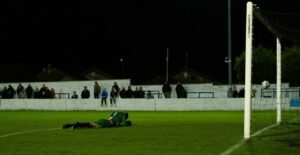 The game ended a couple of minutes later without Bury being able to test the visiting ‘keeper before the referee’s whistle signalled jubilous celebrations from the travelling Prestwich Heys players and fans alike. Heys headed back to Sandgate Road with three points in the bag, a result which leaves Bury AFC fifth in the league after playing three games.

The next game is away at Garstang FC next Wednesday (28th October), 7.45pm Kick-off.