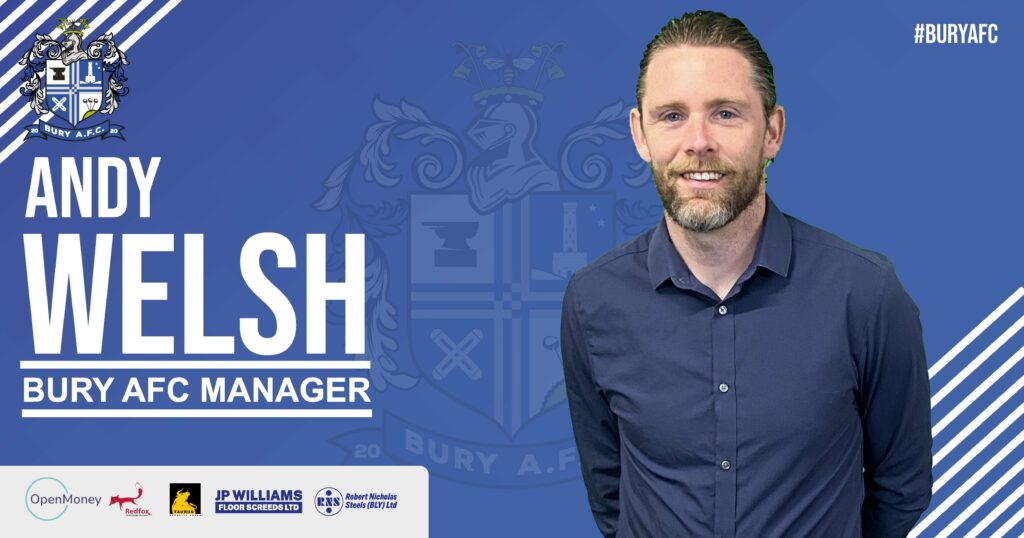 We are delighted to announce Andy Welsh as the first Bury AFC First Team Manager.

Manchester-born Andy was selected from approximately 750 applicants for the position, impressing the Bury AFC board on interview with his drive to succeed and ability to work within the framework of our fan-owned & community-led club.

A left-footed midfielder during his 15-year playing career, his +300 appearances were gained across the footballing spectrum. Spells in the Premier League for Sunderland, competing in the MLS for Toronto, as well as a number of English Football League clubs before finishing his playing career in the non-league in 2017.

Picking up coaching experience from 2014, Andy’s first step into management was at Ossett Albion in 2017, a role which he combined with his running of a local football academy.

During the summer of 2018, Ossett Albion joined forces with Ossett Town to form a new club – Ossett United. Andy was appointed the club’s first manager and proceeded to guide the team to a fifth-place finish in Step 4 of the National League System and securing the county cup against National League North, Guiseley AFC, in the process.

During his spell in charge of Ossett United, Andy secured wins in 35 of his 73 games, the team having the second-best defensive record during the 2018-19 season.

Andy’s performance in his previous roles, knowledge of players across the Manchester and surrounding areas, alongside skills in developing academy structures and players, enables us to make a significant step towards getting Bury AFC competing straight away when the season starts in the coming weeks but also with an eye to the future of developing all aspects of our club as we begin to grow.

Chairman Chris Murray was thrilled to get the club’s first manager in place, “Andy was someone we saw in the role from the moment that we met him. His enthusiasm for football shone through. He comes with a great deal of experience having played at the highest level. We are looking forward to working with Andy and his team to create a team that the fans can be proud of.”

We will be releasing the interview with our new manager tomorrow so keep yourselves here & across our socials to hear what he has to say.